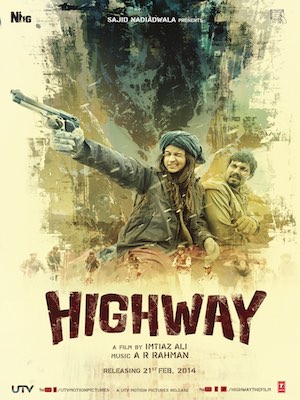 The story begins on the eve of the wedding of Veera Tripathi (Alia Bhatt), the daughter of a rich business tycoon. She is at a petrol pump by the highway with her fiance when she is abducted while her fiance sits in the car convulsed with fear.

The gang who takes her panics when they find out that her father has links in the government. However, Mahabir Bhati (Randeep Hooda), one of her abductors, is willing to do whatever it takes to see this through.

They continuously move to different cities, to avoid being tracked by police. As the days go by, Veera finds peace and a new-found freedom in her bondage to the point that she confides in Mahabir the horrors of her childhood when she was abused by her own uncle as a nine years old. Her fear of abduction is taken over by a sense of freedom. Eventually, when the police forcefully search the truck, Veera, surprisingly even to herself, hides.She concludes that she loves the journey and doesn’t want to go back to her life.

Slowly, she unravels his story in bits and pieces. His father abused both him and his mother when he was a young child. She was used as a sex slave by the rich landlords. Mahabir escapes from there and has never returned. Eventually, Mahabir can’t help but care for Veera and his anger fades away slowly. He tries to leave her at a police station in one of the small mountainous towns they stop in. However, Veera refuses and insists on staying with Mahabir.

Together, they travel; He starts to fall in love with her, they make a home in a hilltop house. One of her many crazy dreams was always to have a small home in the mountains. Mahabir breaks out seeing the way Veera cares, reminding him of his mother. Both sleep peacefully that night, free from their respective haunting pasts. But the very next morning Police come from somewhere and shoot Mahabir to which Veera reacts emotionally and strongly.